You are here: Things to Do > Rocky Mountain 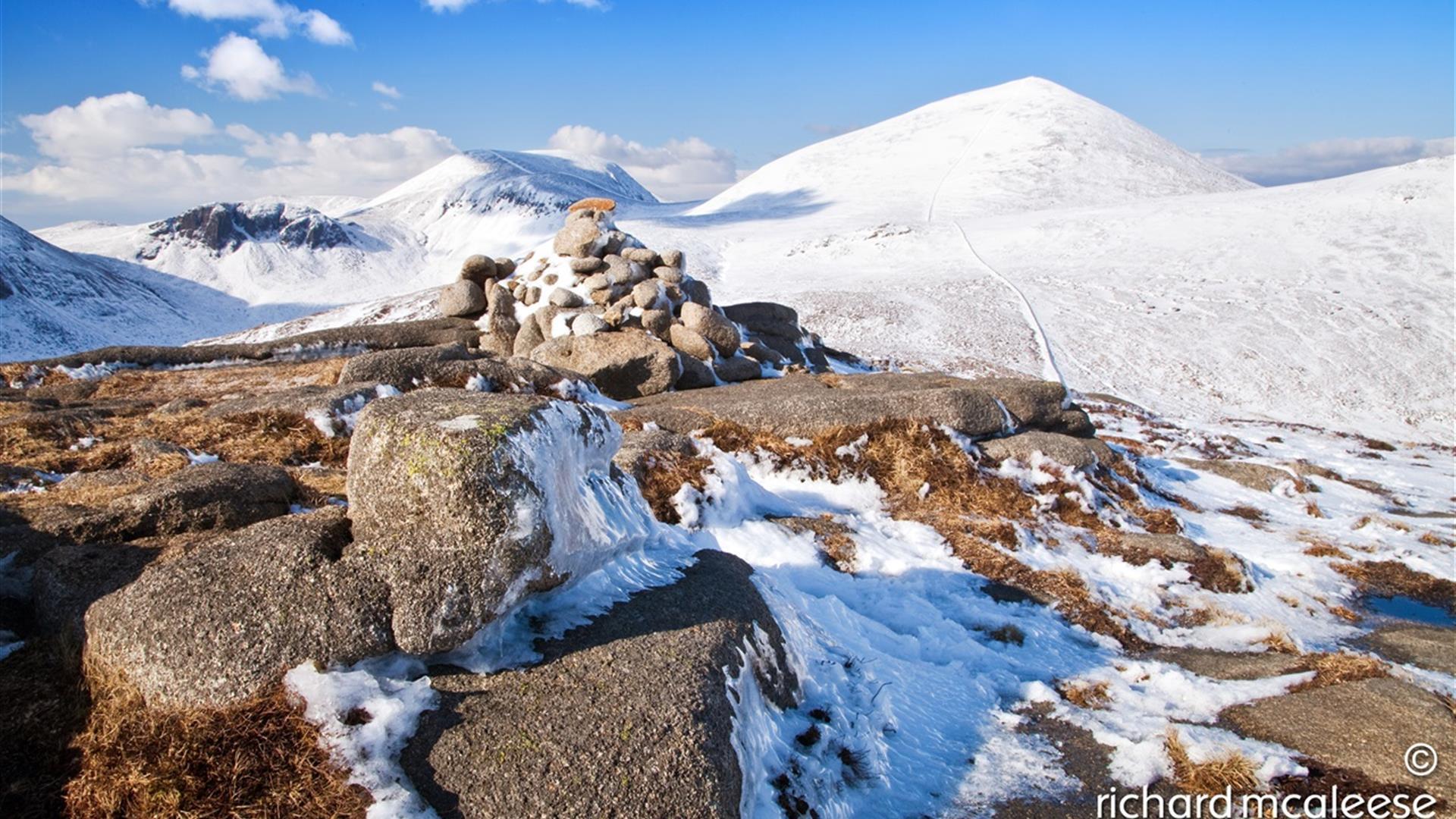 The route begins at the junction of Quarter and Head Road (beside Rourke’s Park) and ascends first Round Seefin and then Rocky Mountain before returning along Dunnywater Track.

For the most part it is easy walking with spectacular views over the coastal plain and the contrasting landscapes of the Annalong Valley. Everywhere stone walls enclosing small fields are a picturesque feature of Mourne farmland. Besides making field boundaries, granite stone provided ideal building material and local quarries (as on Round Seefin) were active during the early part of the last century. The extensive coniferous plantations of the Annalong Valley are of more recent origin. Above 250m tree growth is restricted by strong winds and infertile terrain so that, with increasing altitude, man’s influence on the landscape gives way to natural heather vegetation and an unspoilt panorama across the heart of the Mournes.

Route:
From the top of Quarter Road (J360224) follow the track leading right along the forested edge of Rourke’s Park. Please park sensibly. After 200m cross two gates (50m apart) to bear left upslope. Continue along an obvious track leading toward the quarried face of Round Seefin. PLEASE CLOSE ALL GATES. Reach and cross a third gate (positioned in a stone wall). Turn immediately left and follow the adjacent wall for a short ascent onto Round Seefin. From here there are extensive views across the Annalong Valley. Beginning with the most easterly mountain peaks, a westward sweeping panorama encompasses Slieve Binnian’s outcropping summit and (further right) North Torrs, with the rugged crown of Ben Crom visible (right) in the distance. Continuing inland, the broad back of Slievelamagan and the precipitous faces of Upper and Lower Cove can be seen. Further right, Rocky Mountain partially hides Slieve Donard standing above the undulation ridge formed by Chimney Rock, Blaeberry and Spence’s Mountains. Ahead lies the crest of Long Seefin. Just below its top note the small (dumpling like!) tower which marks the intersection of the Mourne Wall (and its impressive stonework) with the wall which links back to Round Seefin. From Round Seefin continue directly ahead (north-west), in 700m connecting with the Mourne Wall to scale Long Seefin en route to Rocky Mountain. DO NOT follow the minor wall leading right (north-east) from the top of Round Seefin. Beyond Long Seefin the summit of Rocky Mountain can be reached along several rough tracks which lead away (left) from the Mourne Wall. Look for the first of these 1km after the start of Long Seefin’s level summit ridge. Central Mournes panorama from west side of Rocky Mountain. The Blue Lough can be seen at the foot of Slieve Lamagan with the jagged alpine crown of Slieve Bearnagh cutting the skyline further right. Nearer the sea, the twin giants of Slieve Commedagh and Slieve Donard dominate. On clear days look for the line of the Brandy Pad straddling eastwards across the lower slopes of Commedagh and Donard to reach the coast at Bloody Bridge. Return from Rocky Mountain to the Mourne Wall. From here follow an obvious bouldery track which gradually veers right (downslope), linking with the forest edge, Dunnywater Track and then Head Road. If preferred, the Mourne Wall can again be followed, providing a slightly longer – but less strenuous – alternative route back to Dunnywater Track. Please be aware - Although, there are numerous walking routes in the Mournes, the majority of these popular walks are not formally designated public rights of way. Most routes have developed over time due to traditional use. Below 600 feet (180m) most land is privately owned and is farmed or grazed. Many of the traditional access routes cross this land or pass along farm lanes and quarry tracks. Walkers are advised to respect that they may be walking on private land and are encouraged to make themselves aware of and adhere to the principles of 'Leave No Trace' - www.leavenotraceireland.org" Please remember that much of the land you will cross is private property and access is only available through the goodwill of the landowners. Although some areas of the countryside have been traditionally used for recreation, the public have no general rights to access such land and are only walking with the tolerance of the landowner.

Facilities:
Limited parking is in a small layby.